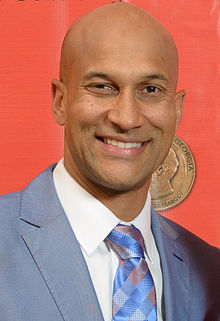 It was on this day,  March 22, 1971,  in M(ichigan) M(ovie) H(istory),  American actor, writer, and comedian Keegan-Michael Key  was born in Southfield, Michigan.

Raised in Detroit,  Key graduated from Shrine Catholic High School in Royal Oak, Michigan and attended the University of Detroit Mercy as an undergraduate.  It was while here he was a brother of Phi Kappa Theta.  He earned his Master of Fine Arts in Theater at Pennsylvania State University.

Key was one of the founders of Hamtramck, Michigan’s Planet Ant Theatre, and co-founder of the Detroit Creativity Project which teaches students in Detroit improvisation as a way to improve their communication skills.    He was a member of the Second City Detroit’s main stage cast before joining the Second City Theater in Chicago.

Key joined the cast of MADtv midway into the ninth season. It was while part of this cast, he and Jordan Peele were cast against each other so that FOX could pick one black cast member, but after demonstrating great comedic chemistry both ended up being picked. Key spent six seasons as a cast member on MADtv.

This site uses Akismet to reduce spam. Learn how your comment data is processed.

Before you leave, why not stop by our store and say "Hi!"

Imagine your merch in our store.  At no cost to you Michigan’s filmmaker, we can help you build your brand and promote your films beyond the articles we will create for you.. We will also put some jingle in your pockets.  What film production could not use extra funds to make them possible?

For details, drop us a line.